Delta (Parallel) robots are a good solution for moving small payloads at high speed with remarkable accuracy and precision. In a recent project, ProMATIC Automation used two Delta style robots from Omron in series to pick randomized parts from a moving conveyor belt. The vacuum EOAT picked the parts off the conveyor and oriented them correctly, then placed them into pockets on an indexing conveyor running parallel to the pick conveyor.

A Cognex Camera imaged the back-lit section of the main conveyor prior to the parts entering the robot pick zone. The conveyor belt position was tracked by an encoder. The software devolved by Adept Technologies for the Quattro robot coordinated the robot movements based on the images and the encoder signal. The software was able to identify which parts were pick-able and was also able to track the parts on the conveyor based on the encoder signal.  Software data also allowed the robot to pick each part at the correct angle such that it could place each part in the correct pocket with proper orientation. 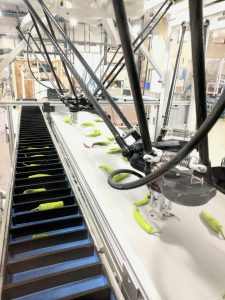 The combined pick rate of this 2-robot system was 3 parts per second for this application.  Although this pick rate is highly dependent on the parts processed in the application, the system pick rate can be improved by adding robots or the cost of the system can be reduced by removing robots.  Therefore, the ProSORT is an expandable solution for sorting small parts.  The platform is configurable and can be customized to suit your application; contact us today for more information!